How lucky am I? I have just experienced three days of nail biting intensity (also a little bit of chocolate biting) while viewing the World Chocolate Masters competition in Paris. I had an amazing opportunity to not only walk through the competition area for an intimate view of the competitors, but I also tasted my way through 20 of the world’s best chocolatiers and pastry chef’s creations.

The competition is split into two groups of ten that compete on day one and day two. The competitors were given the theme ‘Inspiration from Nature’ and both groups had to create the following items on their day of competing: Chocolate showpiece
A chocolate sculpture embracing the theme. All the individual elements for the showpiece can be pre-made but not joined.

Moulded praline
Competitors had the opportunity to design their own chocolate mould fitting with the theme and create a moulded chocolate live during the competition.

Sweet Snack on the Go
A sweet takeaway item made live. The competitors also had to design and print their own packaging to present their snack in.

‘My Or Noir’ story
Prior to the competition commencing all competitors were flown to Paris to design and create their own chocolate from the cocoa bean that was presented at the competition to a panel of expert judges. This chocolate could also be used in any of the competitor’s products.

Here is the twist: After the first two days of competition only the top ten competitors go through to day three. Let me put this into perspective; ten of the competitors who have trained, worked, sacrificed, developed and prepared their products for day three didn’t have the opportunity to compete. Here is what the top ten finalists created on day three:

Selection of Pralines from the Competitors

On October the 30th this year Vincent Vallée from France was crowned World Chocolate Master in Paris. Hailed as the ‘most challenging chocolate competition’ in the world of chocolate, it is the most prestigious title to win for chocolatiers. For the next three years, Vincent Vallée will 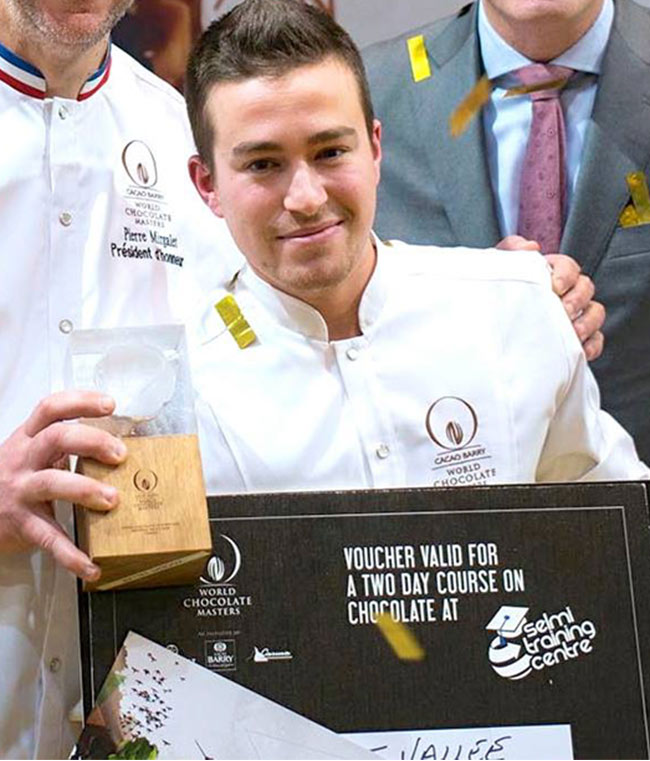 wear the title of World’s Best Chocolate Craftsman. He gets the unique opportunity to visit a cocoa plantation and his work will be displayed in the world-renowned Harrods department store in London. Hinashi Onobayashi from Japan and Marijn Coertjens from Belgium were awarded the silver and bronze medals.

Australia will be holding the World Chocolate Masters national selections at Crown Casino on the 26th of June 2016. For expressions of interest or to receive an entry form please contact Kirsten Tibballs via the Savour contact us page.